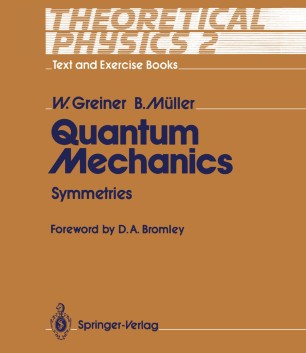 "Quantum Dynamics" is a major survey of quantum theory based on Walter Greiner's long-running and highly successful courses at the University of Frankfurt. The key to understanding in quantum theory is to reinforce lecture attendance and textual study by working through plenty of representative and detailed examples. Firm belief in this principle led Greiner to develop his unique course and to transform it into a remarkable and comprehensive text. The text features a large number of examples and exercises involving many of the most advanced topics in quantum theory. These examples give practical and precise demonstrations of how to use the often subtle mathematics behind quantum theory. The text is divided into five volumes: Quantum Mechanics I - An Introduction, Quantum Mechanics II - Symmetries, Relativistic Quantum Mechanics, Quantum Electrodynamics, Gauge Theory of Weak Interactions. These five volumes take the reader from the fundamental postulates of quantum mechanics up to the latest research in particle physics. Volume 2 presents a particularly appealing and successful theme in advanced quantum mechanics - symmetries. After a brief introduction to symmetries in classical mechanics, the text turns to their relevance in quantum mechanics, the consequences of rotation symmetry and the general theory of Lie groups. The Isospin group, hypercharge, SU (3) and their applications are all dealt with in depth before a chapter on charm and SU (3) leads to the frontiers of research in particle physics. Almost a hundred detailed, worked examples and problems make this a truly unique text on a fascinating side of modern physics.