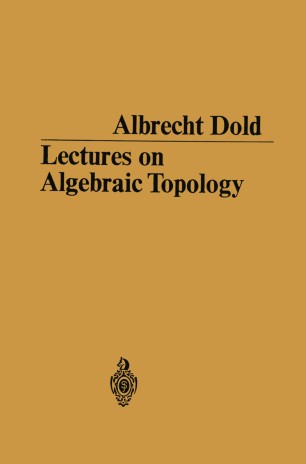 This is essentially a book on singular homology and cohomology with special emphasis on products and manifolds. It does not treat homotopy theory except for some basic notions, some examples, and some applica­ tions of (co-)homology to homotopy. Nor does it deal with general(-ised) homology, but many formulations and arguments on singular homology are so chosen that they also apply to general homology. Because of these absences I have also omitted spectral sequences, their main applications in topology being to homotopy and general (co-)homology theory. Cech­ cohomology is treated in a simple ad hoc fashion for locally compact subsets of manifolds; a short systematic treatment for arbitrary spaces, emphasizing the universal property of the Cech-procedure, is contained in an appendix. The book grew out of a one-year's course on algebraic topology, and it can serve as a text for such a course. For a shorter basic course, say of half a year, one might use chapters II, III, IV (§§ 1-4), V (§§ 1-5, 7, 8), VI (§§ 3, 7, 9, 11, 12). As prerequisites the student should know the elementary parts of general topology, abelian group theory, and the language of categories - although our chapter I provides a little help with the latter two. For pedagogical reasons, I have treated integral homology only up to chapter VI; if a reader or teacher prefers to have general coefficients from the beginning he needs to make only minor adaptions.