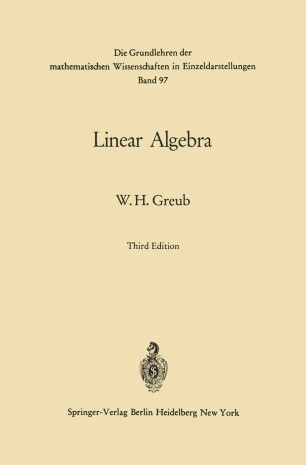 The major change between the second and third edition is the separation of linear and multilinear algebra into two different volumes as well as the incorporation of a great deal of new material. However, the essential character of the book remains the same; in other words, the entire presentation continues to be based on an axiomatic treatment of vector spaces. In this first volume the restriction to finite dimensional vector spaces has been eliminated except for those results which do not hold in the infinite dimensional case. The restriction of the coefficient field to the real and complex numbers has also been removed and except for chapters VII to XI, § 5 of chapter I and § 8, chapter IV we allow any coefficient field of characteristic zero. In fact, many of the theorems are valid for modules over a commutative ring. Finally, a large number of problems of different degree of difficulty has been added. Chapter I deals with the general properties of a vector space. The topology of a real vector space of finite dimension is axiomatically characterized in an additional paragraph.