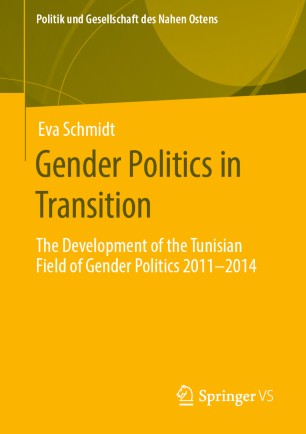 The Development of the Tunisian Field of Gender Politics 2011 -2014

Eva Schmidt analyses how power relations, ideas, and institutions in Tunisian gender politics changed during the democratisation process 2011–2014. Her analysis of gender politics offers a productive lens to understand the course of the Tunisian transition. As gender policies are integral to Tunisian national identity, they became a major battlefield in the fight for political inclusion and exclusion. In this context, liberal and leftist feminists accessed the decision-making institutions and enhanced the existing women’s rights legislation. Yet the intertwinement of modernist nationalism with women’s rights also limited the scope for feminist demands. This book contributes a unique case study to political transitology and advances an original theoretical approach based on Bourdieu’s theory of the political field.
Contents
Target Groups
The Author
Eva Schmidt is a political scientist in the field of contentious politics and political sociology. She conducted her research on the Tunisian democratisation process as a doctoral researcher at the Berlin Graduate School Muslim Cultures and Societies.