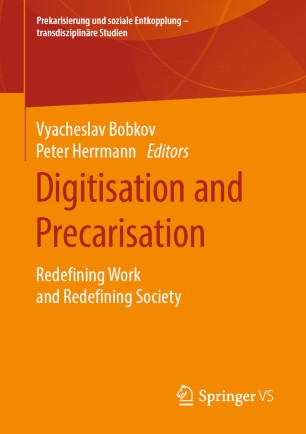 Currently it is fashionable to talk about digitisation, robotisation, industry 4.0, but also about the gig economy, the Millenials, precarisation and the like. However, the relevant issues are too often taken in isolation, referring to an extrapolation of overcome structures. The present collection aims on moving further by qualifying some aspects, and also by approaching the topic from distinct perspectives in order to arrive at an assessment of emerging changes of the socio-economic formation.

Digitisation and Precarisation – Redefining Work and Redefining Society · Economy of Difference and Social Differentiation. Precarity – searching for a new interpretative paradigm · Society under Threat of Precarity of Employment · Precarious Employment: Definition of the Concept Given by Russian Researchers · Digitisation: A New Form of Precarity or New Opportunities? · Labour market performance and digitisation of work: brief overview · Australia’s precarious workforce and the role of digitisation · The Czech Republic – a Case Study · “Predictable uncertainty” – Social Land Programme in Hungary · Affirmative and Alternative Discourses and Practices of Knowledge Production and Distribution in Turkey · Electric dreams of welfare in the 4th industrial revolution: An actor-network investigation and genealogy of an Algorithm · Bringing Precarity to the Political Agenda

Vyacheslav Bobkov, Doctor of Economics, Professor, Chief of the Laboratory of Problems of Life Quality and Living Standards of the Institute of Socio - Economic Problems of Population of the Russian Academy of Sciences, Moscow, Russia

Peter Herrmann, social philosopher, having worked globally in research and teaching positions in particular on social policy and economics