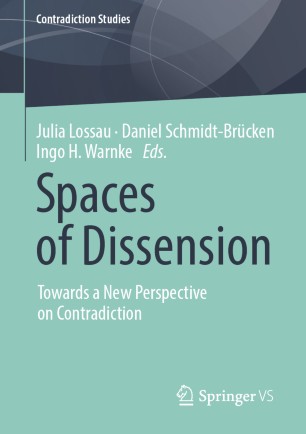 Towards a New Perspective on Contradiction

​This volume focusses on contradiction as a key concept in the Humanities and Social Sciences. By bringing together theoretical and empirical contributions from a broad disciplinary spectrum, the volume advances research in contradiction and on contradictory phenomena, laying the foundations for a new interdisciplinary field of research: Contradiction Studies. Dealing with linguistic phenomena, urban geographies, business economy, literary writing practices, theory of the social sciences, and language education, the contributions show that contradiction, rather than being a logical exemption in the Aristotelian sense, provides a valuable approach to many fields of socially, culturally, and historically relevant fields of research.
Contents
Contradiction in Narrative and Discursive Orders.- Contradiction in Interpersonal Communication and Institutions.- Contradiction, Power, and Governmentality.- Contradiction in Territorial Orders and Infrastructures
Target Groups
Researchers and students in the Humanities and Social Sciences
The Editors
Julia Lossau is professor of Human Geography at the University of Bremen, Germany.
Daniel Schmidt-Brücken is a postdoctoral researcher in German Linguistics at the University of Bremen, Germany.
Ingo H. Warnke is professor of German and Interdisciplinary Linguistics at the University of Bremen, Germany.