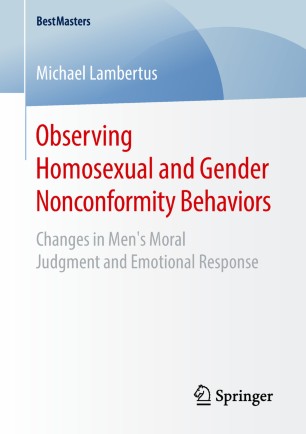 Michael Lambertus examines the influence of perceived homosexual sexual and gender nonconform behaviors on the elicitation of two moral emotions, disgust and contempt, as well as moral judgment of male participants in his study. In doing so, he considers the extent to which these men endorse specific cultural beliefs about masculinity–also referred to as ‘masculinity ideology’. The author succeeds in proving an increase in disgust towards perceived homosexual, but not towards heterosexual sexual behavior of a description of a fictional person, the more the participants advocate masculine gender role norms.
Contents
• Morality and Moral Emotions
• Endorsement of Male Role Norms
• Elicitation of Disgust, Contempt, and Moral Judgment
Target Groups
• Lecturers and students of psychology, especially social and moral psychology
• Practitioners and researchers in the fields of social equity and diversity, education
The Author
Michael Lambertus completed his master's thesis at the University of Basel, Switzerland. His research focuses on social, economic, and decision psychology.