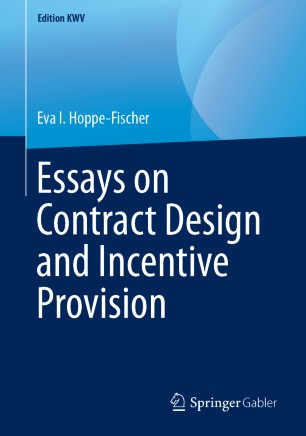 Contract theory, which emphasizes the importance of unverifiable actions and private information, has been a highly active field of research in microeconomics in the last decades. This thesis is divided into two parts. Part I consists of three chapters that study contract-theoretic models which are motivated by the classic procurement problem of a principal who wants an agent to deliver a certain good or service. In such models it is typically assumed that decision makers are interested in their own monetary payoffs only. Moreover, they have unlimited cognitive abilities and behave in a perfectly rational way. Yet, in practice people often do not behave this way. While empirical research is very difficult in contract theory, laboratory experiments have recently turned out to be an important source of data. In Part II, three experimental studies are presented that investigate contract-theoretic problems brought up in Part I.

Eva I. Hoppe-Fischer published her work with Kölner Wissenschaftsverlag until 2018.