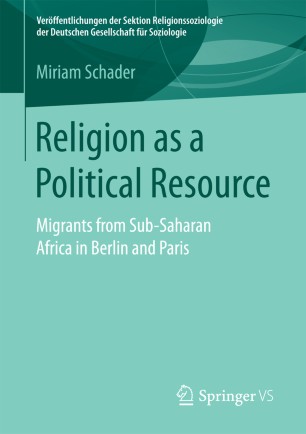 Religion as a Political Resource

Migrants from Sub-Saharan Africa in Berlin and Paris

Miriam Schader shows that migrants can use religion as a resource for political involvement in their (new) country of residence – but under certain circumstances only. The author analyses the role religious networks and symbols play for the politicization and participation of Muslim and Christian migrants from sub-Saharan Africa in Berlin and Paris. Against the widely held belief that Islam is a ’political religion’ in itself, this study demonstrates that Christian migrants draw on their religion for political action more easily than their Muslim counterparts. It also highlights that it is not religion in general which helps migrants get politically active, but particular forms of religious organisations and particular theological elements.
Contents
Target Groups
The Author
Miriam Schader is a postdoctoral researcher at the Max Planck Institute for the Study of Religious and Ethnic Diversity.