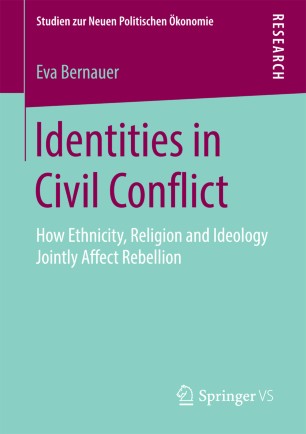 Eva Bernauer predicts civil conflicts based upon the political exclusion of identity groups and their transnational links to external governments. The innovation lies in a simultaneous consideration of three identities – ethnicity, religion, and class-based ideology – thus extending previous studies with merely an ethnic focus. Most importantly, such a perspective implies a shift towards a society’s unique three-dimensional identity setup, upon which the excluded population and their transnational links can be determined. The author presents original data on the three-dimensional identity setup for 57 countries and introduces a formal model where rebel leaders strategically use identities to garner the support of the population. Key quantities of interest, such as the largest excluded subgroup or the number of identity links to external governments, are tested in several quantitative analyses as predictors for the onset of civil conflicts. The author shows that there is an added value of extending the mere ethnic perspective to also encompass religion and class-based ideology.

Eva Bernauer received her doctor’s degree from the University of Mannheim.