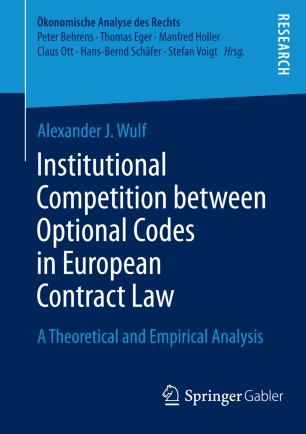 A Theoretical and Empirical Analysis

The Commission of the European Union has identified divergences between the national contract laws of the Member States as an obstacle to the completion of the European Internal Market and put this issue on its highest political agenda. Alexander J. Wulf analyses and predicts the effects. The study is situated in the context of the recent developments in the discussion on European contract law. The book begins with an introduction to the economic and legal theories that serve as the rationale for the development of the line of argument. These theories are then applied to the issues involved in the current controversy on European contract law. The author develops a model that he uses to analyze the institutional processes of European contract law. Empirical data are employed to test this model and discuss the results. From his analysis the author develops criteria that can serve as a starting point for thinking about the economic desirability of an optional European contract law.

·       Assessment of the Desirability of an Optional European Contract Law

·        Lecturers and students of economics, business administration and law with a focus on European studies