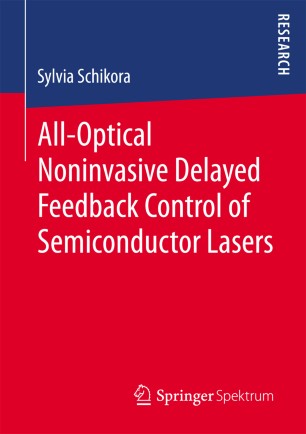 The stabilization of unstable states hidden in the dynamics of a system, in particular the control of chaos, has received much attention in the last years. Sylvia Schikora for the first time applies a well-known control method called delayed feedback control entirely in the all-optical domain. A multisection semiconductor laser receives optical feedback from an external Fabry-Perot interferometer. The control signal is a phase-tunable superposition of the laser signal and provokes the laser to operate in an otherwise unstable periodic state with a period equal to the time delay. The control is noninvasive, because the reflected signal tends to zero when the target state is reached.

The work has been awarded the Carl-Ramsauer-Prize 2012.

·         Control of an Unstable Stationary State and of Unstable Selfpulsations

·         Researchers and students of nonlinear dynamics or semiconductor laser technology, interested in the application of control synchronization in the GHz range

·         Practitioners in the field of optical telecommunication

Dr. Sylvia Schikora completed her doctoral thesis on ultrafast noninvasive control of semiconductor lasers at the Department of Physics, Humboldt University of Berlin. She currently works at Humboldt University as a postdoctoral researcher with a focus on optical metrology.