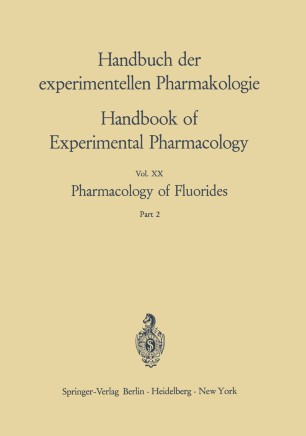 This volume is the completion of work initially planned several years ago as a compilation of selected aspects of the biological effects of fluorides. The first portion appeared in Volume XXII (1966) of this Handbuch, under the title "Pharmacology of Fluorides, Part 1. " Inasmuch as the present volume is an integral part of the original project, justification for offering it to the scientific community remains the same as that originally set forth. This may be recapitulated as follows. The tremendous increase in the annual production of fluorides over the amounts produced thirty years ago, together with the increased diversity of their uses has correspondingly increased the hazard associated with these materials. That is to say, the possibilities of encountering their characteristic toxic effects under the conditions of their use has increased because the variety, amounts and ways of usage have increased. Their inherent toxicity, of course has not changed, but the increased hazard has led to a vast increase in the amount and scope of research reported. It is the purpose of these volumes to review selected aspects of this literature. Rochester, N. Y. , February 1970 FRANK A. SMITH Acknowledgements Even the casual reader of this volume will soon realize that contributing authors, as well as those contributing to its predecessor, Volume XX/I, have made good use of tables of data, figures and pertinent quotations from previously published work.