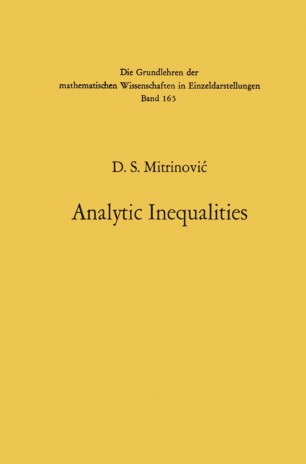 The Theory of Inequalities began its development from the time when C. F. GACSS, A. L. CATCHY and P. L. CEBYSEY, to mention only the most important, laid the theoretical foundation for approximative meth­ ods. Around the end of the 19th and the beginning of the 20th century, numerous inequalities were proyed, some of which became classic, while most remained as isolated and unconnected results. It is almost generally acknowledged that the classic work "Inequali­ ties" by G. H. HARDY, J. E. LITTLEWOOD and G. POLYA, which appeared in 1934, transformed the field of inequalities from a collection of isolated formulas into a systematic discipline. The modern Theory of Inequalities, as well as the continuing and growing interest in this field, undoubtedly stem from this work. The second English edition of this book, published in 1952, was unchanged except for three appendices, totalling 10 pages, added at the end of the book. Today inequalities playa significant role in all fields of mathematics, and they present a very active and attractive field of research. J. DIEUDONNE, in his book "Calcullnfinitesimal" (Paris 1968), attri­ buted special significance to inequalities, adopting the method of exposi­ tion characterized by "majorer, minorer, approcher". Since 1934 a multitude of papers devoted to inequalities have been published: in some of them new inequalities were discovered, in others classical inequalities ,vere sharpened or extended, various inequalities ,vere linked by finding their common source, while some other papers gave a large number of miscellaneous applications.