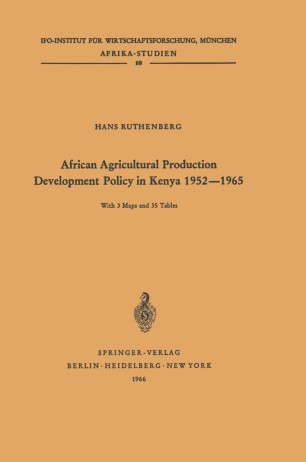 In volume 2 of the "Afrika-Studien" an appraisal of the agricultural development policy in Tanganyika (now Tanzania) from 1950 to 1963 was made. This report is a continuation of the work in East Africa, with the emphasis lying on a tentative quantitative assessment of costs and benefits of smallholder development. There are few countries in Africa south of the Sahara where as many and as various measures for the promotion of small­ holder farming have been tried as consistently and intensively as in Kenya. In particular the "Swynnerton Plan" led to the employment of substantial sums in African farming. Some of the approaches have been highly success­ ful, others not. It is the purpose of this report to inform about aims and institutions, methods and difficulties, costs and benefits. Prof. Dr. EMIL WOERMANN Institut fiir landwirtschaftliche Betriebs- und Landarbeitslehre, Gottingen Acknowledgements As usual with reports of this nature, my main debt is to a great number of smallholders, settlers, scheme managers, Agricultural Officers and Instruc­ tors who so willingly discussed their problems with me and thus provided the information on which this report is based. I am most grateful for the support rendered by the various Departments of the Kenya Government. A debt of gratitude is owed particularly to the Fritz Thyssen Foundation, Cologne, which provided the funds and to the Ifo-Institute, Munich, which provides the institutional framework for German economic research work in East Africa. Most valuable advice and criticism was given by Mr. ]. D.