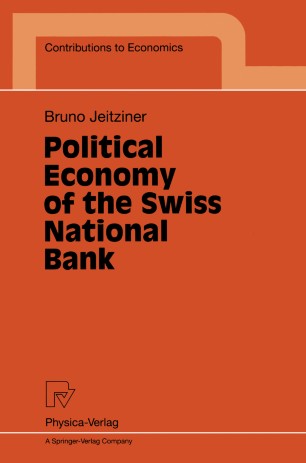 Political Economy of the Swiss National Bank examines whether there exists any systematic political influence on Swiss monetary policy. A partial adjustment model is used to derive the reaction functions. Models of political business cycles and the theory of legislative control are for the first time applied to the Swiss institutional setting. The inflationary performance of the National Bank is not explained with the legal relationship between the executive branch of government and the central bank. It is interpreted as the result of the structure of the executive (commission government) and the characteristics of the Swiss political market for monetary policy. In empirical tests no indirect political influence, defined as a systematic relationship between fiscal and monetary policy, and no direct political influence from elections, the executive and the legislature can be detected.