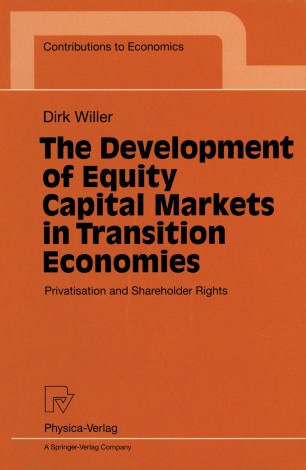 The Development of Equity Capital Markets in Transition Economies

This book addresses two different but related topics that can arise during the development of equity capital markets and which could possibly hinder their development: partial privatisation and shareholder rights. Both issues are developed in the context of transition economies in general and Russia in particular. Chapter 2 puts forward a theory of partial privatisation, i. e. a model that aims to explain why the state keeps some residual shares. Several recent surveys for Russia have shown that the state does often not actively use the voting rights of its residual shares. If this was true, partial privati­ sation could entrench management and hinder restructuring. It would also limit the supply of shares, which could lead to low liquidity. This would be likely to slow down the development of the equity capital market. However, the model in chapter 2 shows that it can be rational to hold back shares from sale in order to maximise privatisation receipts. Another issue which holds back the development of this market is the fact that shareholder rights can­ not be guaranteed by the state due to weak institutions. Chapter 3 contains an empirical examination of which firms honour shareholder rights and also provides a direct link between this problem and partial privatisation. Maybe surprisingly, some weak evidence is presented that shows that the residual state holding does not exert a negative influence with respect to the introduc­ tion of shareholder rights, but might even be a weak positive force.