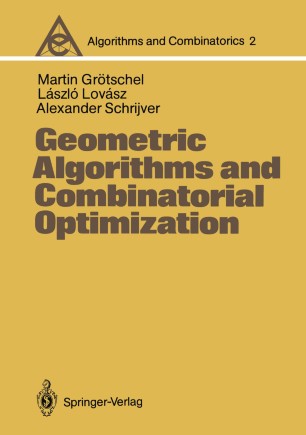 Part of the Algorithms and Combinatorics book series (AC, volume 2)

Historically, there is a close connection between geometry and optImization. This is illustrated by methods like the gradient method and the simplex method, which are associated with clear geometric pictures. In combinatorial optimization, however, many of the strongest and most frequently used algorithms are based on the discrete structure of the problems: the greedy algorithm, shortest path and alternating path methods, branch-and-bound, etc. In the last several years geometric methods, in particular polyhedral combinatorics, have played a more and more profound role in combinatorial optimization as well. Our book discusses two recent geometric algorithms that have turned out to have particularly interesting consequences in combinatorial optimization, at least from a theoretical point of view. These algorithms are able to utilize the rich body of results in polyhedral combinatorics. The first of these algorithms is the ellipsoid method, developed for nonlinear programming by N. Z. Shor, D. B. Yudin, and A. S. NemirovskiI. It was a great surprise when L. G. Khachiyan showed that this method can be adapted to solve linear programs in polynomial time, thus solving an important open theoretical problem. While the ellipsoid method has not proved to be competitive with the simplex method in practice, it does have some features which make it particularly suited for the purposes of combinatorial optimization. The second algorithm we discuss finds its roots in the classical "geometry of numbers", developed by Minkowski. This method has had traditionally deep applications in number theory, in particular in diophantine approximation.