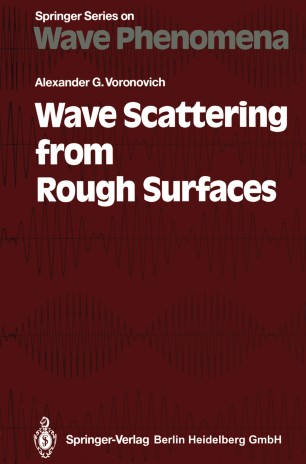 Diverse areas of physics and its applications deal with wave scattering at rough surfaces: optics, acoustics, remote sensing, radio astronomy, physics of solids, diffraction theory, radio and wave-propagation techniques, etc. The mathe­ matical description of relevant problems is rather universal and theoretical methods analysing this phenomenon form a definite area of mathematical physics. It was founded by Lord Rayleigh at the beginning of the 20th century and has been intensively developed since 1950 in response to practical needs. Modern theory involves, along with the classical methods, some new ap­ proaches with much more extensive possibilities. The theoretical methods describing wave scattering at rough surfaces repre­ sent the subject of this book. Having studied this area over many years, the author came to the conclusion that most of the results found in this theory can easily be obtained and comprehended in the framework of a rather universal scheme and this became the motive for writing the present monograph. The first half of the book deals with the classical results. However, several new problems are considered in connection with the methods used here (for example, some applications of the Rayleigh hypothesis and its relation to the Lippman argument). The second half is fully devoted to recent results presented in papers but not yet in books. For this reason the author hopes that the present book will be of interest to both newcomers and experts in this area.