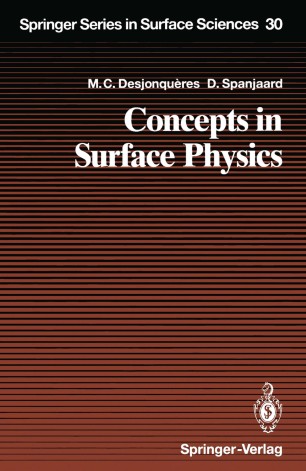 This textbook is intended as an introduction to surface science for graduate students. It began as a course of lectures that we gave at the University of Paris (Orsay). Its main objectives are twofold: to provide the reader with a compre­ hensive presentation of the basic principles and concepts of surface physics and to show the usefulness of these concepts in the real world by referring to experiments. It starts at a rather elementary level since it only requires a knowledge of solid state physics, quantum mechanics, thermodynamics and statistical physics which does not exceed the background usually taught to students early in their university courses. However, since it finally reaches an advanced level, we have tried to render it as self-contained as possible so that it remains accessible even to an unexperienced reader. Furthermore, the emphasis has been put on a pedagogical level rather than on a technical level. In this spirit, whenever possible, models which are simplified, but which contain the features that are essential to the appearance of the phenomena, have been set up and solved in a completely analytical way. The logic should be transparent enough for the reader although, most often, a more rigorous solution would need the use of a computer. To conclude, we have tried to give an account of surface physics which should be of use to the theoretician as well as to the experimentalist. The following comments can be made on the contents of this book.