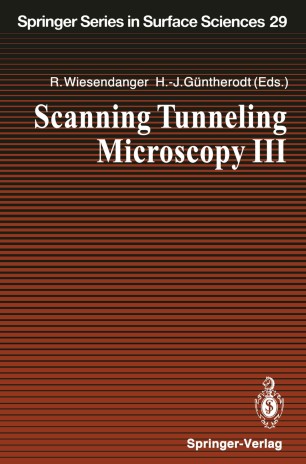 While the first two volumes on Scanning Tunneling Microscopy (STM) and its related scanning probe (SXM) methods have mainly concentrated on intro­ ducing the experimental techniques, as well as their various applications in different research fields, this third volume is exclusively devoted to the theory of STM and related SXM methods. As the experimental techniques including the reproducibility of the experimental results have advanced, more and more theorists have become attracted to focus on issues related to STM and SXM. The increasing effort in the development of theoretical concepts for STM/SXM has led to considerable improvements in understanding the contrast mechanism as well as the experimental conditions necessary to obtain reliable data. Therefore, this third volume on STM/SXM is not written by theorists for theorists, but rather for every scientist who is not satisfied by just obtaining real­ space images of surface structures by STM/SXM. After a brief introduction (Chap. 1), N. D. Lang first concentrates on theoretical concepts developed for understanding the STM image contrast for single-atom adsorbates on metals (Chap. 2). A scattering-theoretical approach to the STM is described by G. Doyen (Chap. 3). In Chap. 4, C. NClguera concentrates on the spectroscopic information obtained by STM, whereas the role of the tip atomic and electronic structure in STM/STS is examined more closely by M. Tsukada et al. in Chap. 5.