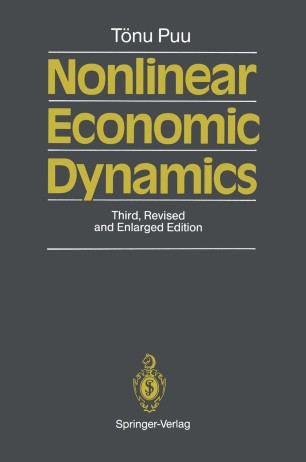 The present study deals with nonlinear economic dynamics, with which the author has been concerned the last years. It grew out from the joint work by Professor Martin Beckmann and the present author on nonlinear statics in spatial economics, Beckmann and Pull, "Spatial Economics" (N orth-Holland 1985), later followed by its companion, Beckmann and Puu "Spatial Structures" (Springer-Verlag 1990). The first mono­ graph mentioned contains sections on price waves and business cycles, but in a linear format. The rest is static theory. The author has finally come to the conviction that linear dynamic modelling has very little to yield. This is due to the poor set of alternatives -decay or explosion of motion -pertinent to linear models. Therefore, the present work centres on non-linearity. Another distinction is that only purely causal models are dealt with, as those formatted as inter-temporal equilibria hardly belong to the more restricted field of dynamics. The spatial origin is visible in the choice of models. Chapters 1 and 2 summarize the work by the author on the structural stability of continuous spatial market eqUilibrium models. Chapter 3 deals with a re-formulation of the ingenious population growth and diffusion model invented by the young Hotelling in 1921. Chapter 4 is a detailed digression on business cycle models in a continuous spatial format with inter-regional trade.