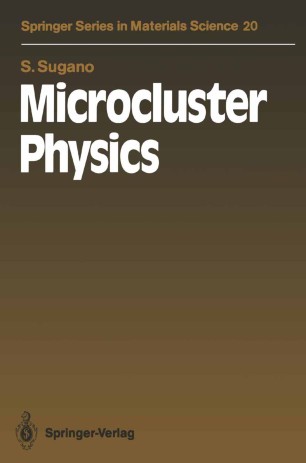 This book aims at providing graduate students and researchers with funda­ mental knowledge indispensable for entering the new field of "microclus­ 3 ters". Microclusters consisting of 10 to 10 atoms exhibit neither the pro­ perties of the corresponding bulk nor those of the corresponding molecule of a few atoms. The microclusters may be considered to form a new phase of materials lying between macroscopic solids and microscopic particles such as atoms and molecules, showing both macroscopic and microscopic features. However, research into such"a riew phase has been left untouched until recent years by the development of the quantum theory of matter. The microscopic features of microclusters were first revealed by ob­ serving anomalies of the mass spectrum of a Na cluster beam at specific sizes, called magic numbers. Then it was experimentally confirmed that the magic numbers come from the shell structure of valence electrons. Being stimulated by these epoch-making findings in metal microclusters and aided by progress of the experimental techniques producing relatively dense, non­ interacting micro clusters of various sizes in the form of micro cluster beams, the research field of microclusters has developed rapidly in these 5 to 7 years. The progress is also due to the improvement of computers and com­ putational techniques, which have made it possible to perform ab initio cal­ culations of the atomic and electronic structure of smaller microclusters, as well as to carry out computer simulations of their dynamics.