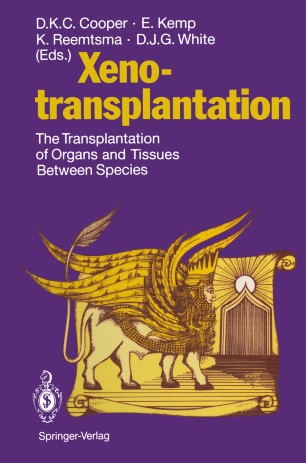 The Transplantation of Organs and Tissues Between Species

The cover of this book depicts a Lamassu, one of the "fabulous" beasts of mythology [1]. Like many similar creatures, such as the Chimera, Griffon, Hippocamp, and Cockatrice, the body of the Lamassu was clearly a combination of structures derived from sev­ eral different species - in other words, it provides a highly success­ ful example of xenotransplantation. But in selecting a symbol of xenotransplantation to grace the cover of this volume, why choose the Lamassu in preference to the other ancient beasts? The reason is that the Lamassu appears to have been endowed with a much Fig. I. Homer described the Chimera as consisting of a lion's foreparts, a goat in the middle, and a serpent's hind parts VIII Foreword Fig. 2. The Griffon had the foreparts of an eagle, and the rear, tail, and hindlegs of a lion. Its eagle-like head had pointed, upstanding ears like those of an ass. Feathers grew upon its head, neck and chest, and the rest of its body was covered in leonine fur more benign and desirable character than many of its mythologi­ cal associates. For example, reliable reports state that the Chimera (Fig. 1)­ hitherto the animal most commonly selected to symbolize xenografting - killed everyone who came within range of its fiery breath. Perhaps not surprisingly, therefore, the Chimera is vari­ ously described as one of the "largest monsters ever born," a "sav­ age creature," and a "symbol of complex evil.