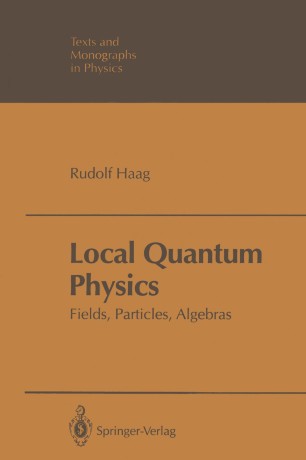 Four years aga Walter Thirring suggested to me that it would be desirable to have a book describing recent results of the "algebraic approach" to quantum field theory and statistical mechanics. After long deliberations with my younger colleagues I decided to write a book but to enlarge the topic, the guiding line be­ ing expressed in the title "Local Quantum Physics". In essence this concerns the synthesis between special relativity and our understanding of quantum physics, together with a few other principles of a general nature. The algebraic approach, that is the characterization of the theory by a net of algebras of local observ­ ables, provides a concise language for this and an efficient tool for the study of the anatomy of the theory and of the relevance of various parts to qualita­ tive physical consequences. It is introduced in Chapter III. In compliance with the original suggestion its main results of more recent vintage are described in Chapters IV to VI. The first two chapters serve to place this material into context and make the book reasonably self contained. There is a rough tem­ poral order. Thus Chapter I briefly describes the pillars of the theory existing before 1950. Chapter II deals with progress in understanding and techniques in quantum field theory, achieved for the most part in the fifties and early sixties.