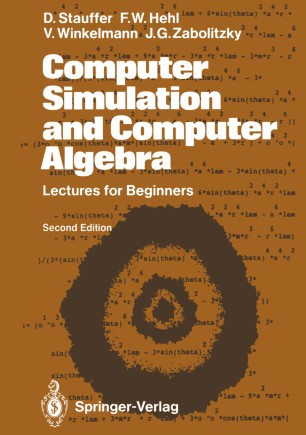 The chapter on statistical-physics simulations has been enlarged, mainly by a dis­ cussion of multispin coding techniques for the Ising model (bit-by-bit parallel oper­ ations). In the chapter about Reduce, some details of the presentation have been cor­ rected or clarified. The new operator MATEIGEN for the computation of eigenvec­ tors of matrices is explained. The first chapter and the appendix remain unchanged. Needless to say, the field of computational science is advancing so quickly, for ex­ ample with the development of parallel, as opposed to vectorized, algorithms, that it will not be too long before a further edition is called for. Cologne, March 1989 The authors Preface to the First Edition Computers play an increasingly important role in many of today's activities, and correspondingly physicists find employment after graduation in computer­ related jobs, often quite remote from their physics education. The present lectures, on the other hand, emphasize how we can use computers for the purposes of fundamental research in physics. Thus we do not deal with programs designed for newspapers, banks, or travel agencies, i.e., word processing and storage of large amounts of data.