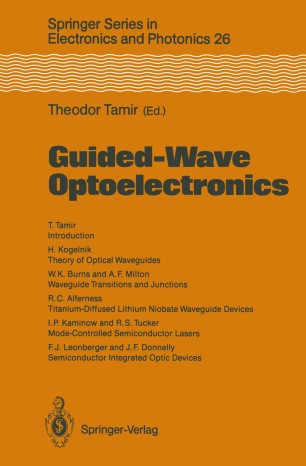 Part of the Springer Series in Electronics and Photonics book series (SSEP, volume 26)

The first guided-wave components that employed signals in the form of light beams traveling along thin films were fabricated a little more than two decades ago. The parallel development of semiconductor lasers and the subsequent availability of low-loss optical fibers made possible the imple­ mentation of completely optical systems for communications, signal pro­ cessing and other applications that had used only electronic circuitry in the past. Referred to as integrated optics, this technology has been rein­ forced by utilizing electronic components that act as controlling elements or perform other functions for which the optical counterparts are not as effec­ tive. The broader area thus generated was aptly named optoelectronics and it currently represents a fascinating, rapidly evolving and most promising technology. Specifically, the amalgamation of electronic and optics compo­ nents into an integrated optoelectronics format is expected to provide a wide range of systems having miniaturized, high speed, broad band and reliable components for telecommunications, data processing, optical computing and other applications in the near and far future. This book is intended to cover primarily the optical portion of the op­ toelectronics area by focusing on the theory and applications of components that use guided optical waves. Hence all aspects of integrated optics are dis­ cussed, but optoelectronic components having primarily electronic rather than optical functions have not been included. Each chapter has been writ­ ten by experts who have actively participated in developing the specific areas addressed by them.