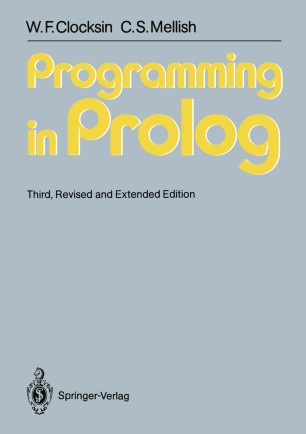 We have added new material to Chapter 3 to give an account of up-to-date programming techniques using accumulators and difference structures. Chapter 8 contains some new information on syntax errors. Operator precedences are now compatible with the most widely-used implementations. We have made further reorganisations and improvements in presentation, and have corrected a number of minor errors. We thank the many people who brought typographical errors in the previous edition to our attention, and we thank A.R.C. for careful proofreading. Cambridge, England W.F.C. January,1987 C.S.M. PREFACE TO THE SECOND EDITION (1984) Since the first publishing of Programming in Prolog in 1981, Prolog has continued to attract an unexpectedly great deal of interest in the computer science community and is now seen as a potential basis for an important new generation of programming languages and systems. We hope that Programming in Prolog has partially satisfied the increasing need for an easy, yet comprehensive introduction to the language as a tool for practical programming. In this second edition we have taken the opportunity to improve the presentation and to correct various minor errors in the original. We thank the many people who have given us suggestions for corrections and improvement. Cambridge, England W.F.C.