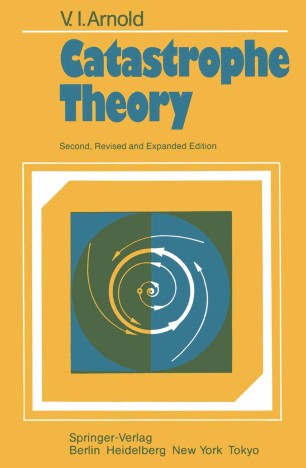 "This short book, which is a translation from the Russian, provides a concise, non-mathematical review of the less controversial results in catastrophe theory. The author begins by describing the established results in the theory of singularities and bifurcation and continues with chapters on the applications of the theory to topics such as wavefront propagation, the distribution of matter within the universe, and optimisation and control. The presentation is enhanced by numerous diagrams.

... This is a short, critical and non-mathematical review of catastrophe theory which will provide a useful introduction to the subject."

"Vladimir Arnold is a giant among contemporary mathematicians, and one of the three who stand out in the creation and development of catastrophe theory. ..."

"... This is a beautiful little book, popular mathematics at its best, a delight to read and unreservedly recommended to novice and expert alike. ..."

"... The book can be warmly recommended to everyone who is interested in singularity theory. It also gives interesting information for researchers working on the subject."

"... There is probably no one else in the world who could have written this book. It remains an engrossing summary of a vast body of work which is one of the major achievements of twentieth-century mathematics."