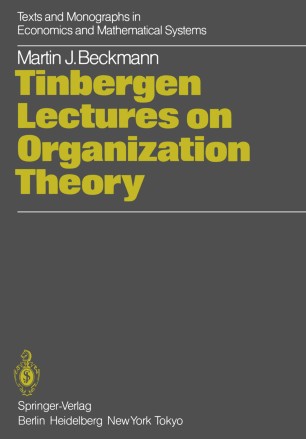 In this book Professor Beckmann, with considerable ingenuity, offers a mathematical analysis of productive organizations in the widest sense. Starting with descriptive features he builds up, step by step, production functions, profiting from the rigor of a set of axioms or assumptions and their logical implications. Among the organizations studied hierarchies play a predominant role and are compared with such forms of cooperation as partnerships and "ladders". A number of well-known basic concepts such as span of control, rank, line vs. staff and others serve as starting points. His analysis leads to such refinements as balanced, regular or degenerated organization patterns and interesting comparisons of the efficiency of various structures. Empirical verification of the axioms or assumptions is not the objective chosen by the author--except a few concrete illustra­ tions--but the book constitutes an excellent basis for such research. Several of the results obtained take simpler forms for very large hierarchies. The renewed interest, shown in political discussions, in the bureaucratization of both large enterprises and government machinery makes Dr. Beckmann's work highly topical. Discussions (by Bahro) of the GDR and by many other authors of Japanese management as compared with American or western European are cases in point. Some additional variables may then have to be added, of a psychological nature: for instance satisfaction from work or irritation evoked by excessive supervision.