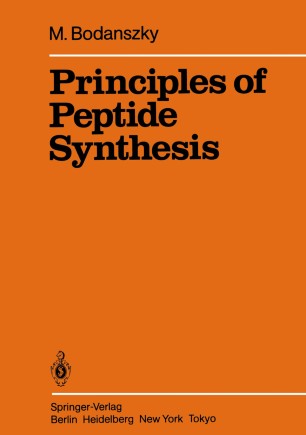 A look at the shelves of a major library awakens doubts in the author of this small volume about the importance of writing a new introduction to peptide synthesis. This rather narrow area of bio-organic chemistry already has received considerable attention. A whole series of books deals with the synthesis of peptides. Some of these are textbooks written to support lecture courses on peptide synthesis. Others try to help the beginner, otherwise well versed in organic chemistry, to embark on some experimental project that requires the construction of peptide chains. Not less useful are the monographs which were compiled to aid the adept practitioner and to provide him with references to the growing literature of a very active field. Is there any need for a new book on peptide synthesis? Should we add a new volume to an already impressive and certainly useful series? The answer is not obvious. The author has already participated in two similar en­ deavors. The first edition! of "Peptide Synthesis", with M. A. Ondetti as coauthor, was meant to serve as an introduction for the beginner. It was rather well received by researchers who joined the field of peptide chemistry and were looking for initiation. While working on the 2 second edition with Drs. Klausner and Ondetti, we became painfully aware of the impossibility of the task.