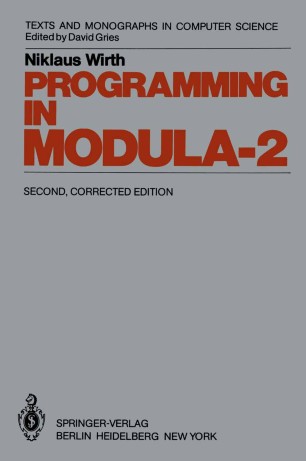 This text is an introduction to programming in general, and a manual for programming with the language Modula-2 in particular. It is oriented primarily towards people who have already acquired some basic knowledge of programming and would like to deepen their understanding in a more structured way. Nevertheless, an introductory chapter is included for the benefit of the beginner, displaying in a concise form some of the fundamental concepts of computers and their programming. The text is therefore also suitable as a self-contained tutorial. The notation used is Modula-2, which lends itself well for a structured approach and leads the student to a working style that has generally become known under the title of structured programming. As a manual for programming in Modula-2, the text covers practically all facilities of that language. Part 1 covers the basic notions of the variable, expression, assignment, conditional and repetitive statement, and array data structure. Together with Part 2 which introduces the important concept of the procedure or subroutine, it contains essentially the material commonly discussed in introductory programming courses. Part 3 concerns data types and structures and constitutes the essence of an advanced course on programming. Part 4 introduces the notion of the module, a concept that is fundamental to the design of larger programmed systems and to programming as team work. The most commonly used utility programs for input and output are presented as examples of modules. And finally, Part 5 covers facilities for system programming, device handling, and multiprogramming.