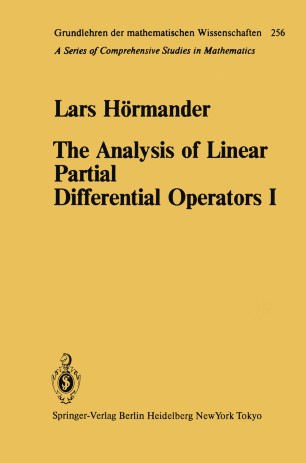 The Analysis of Linear Partial Differential Operators I

In 1963 my book entitled "Linear partial differential operators" was published in the Grundlehren series. Some parts of it have aged well but others have been made obsolete for quite some time by techniques using pseudo-differential and Fourier integral operators. The rapid de­ velopment has made it difficult to bring the book up to date. Howev­ er, the new methods seem to have matured enough now to make an attempt worth while. The progress in the theory of linear partial differential equations during the past 30 years owes much to the theory of distributions created by Laurent Schwartz at the end of the 1940's. It summed up a great deal of the experience accumulated in the study of partial differ­ ential equations up to that time, and it has provided an ideal frame­ work for later developments. "Linear partial differential operators" be­ gan with a brief summary of distribution theory for this was still un­ familiar to many analysts 20 years ago. The presentation then pro­ ceeded directly to the most general results available on partial differ­ ential operators. Thus the reader was expected to have some prior fa­ miliarity with the classical theory although it was not appealed to ex­ plicitly. Today it may no longer be necessary to include basic distribu­ tion theory but it does not seem reasonable to assume a classical background in the theory of partial differential equations since mod­ ern treatments are rare.

"... it is the best now available in print. ... All the theorems are there (among them the Schwartz kernel theorem), and all they have ... proofs." Bulletin of the American Mathematical Society "It certainly will be a classic for many years." Zentralblatt für Mathematik