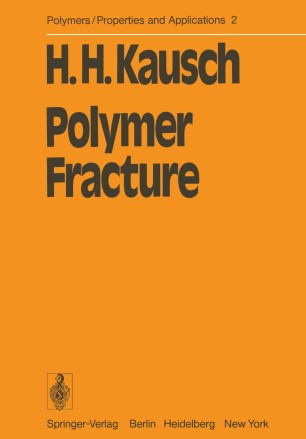 This book on "Polymer Fracture" might as well have been called "Kinetic Theory of Polymer Fracture". The term "kinetic theory", however, needs some de­ finition or, at least, some explanation. A kinetic theory deals with and particu­ larly considers the effect of the existence and discrete size, of the motion and of the physical properties of molecules on the macroscopic behavior of an ensemble, gaseous or other. A kinetic theory of strength does have to consider additional aspects such as elastic and anelastic deformations, chemical and physical reactions, and the sequence and distribution of different disintegration steps. In the last fifteen years considerable progress has been made in the latter do­ mains. The deformation and rupture of molecular chains, crystals, and morphologi­ cal structures have been intensively investigated. The understanding of the effect of those processes on the strength of polymeric materials has especially been furthered by the development and application of spectroscopical methods (ESR, IR) and of the tools offracture mechanics. It is the aim of this book to relate the conventional and successful statistical, parametrical, and continuum mechanical treatment of fracture phenomena to new results on the behavior of highly stressed molecular chains.