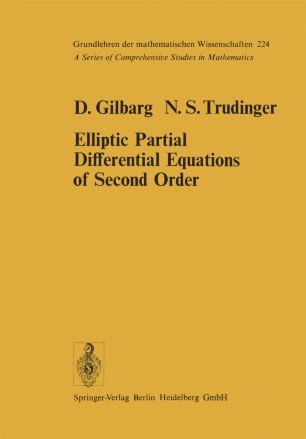 This volume is intended as an essentially self contained exposition of portions of the theory of second order quasilinear elliptic partial differential equations, with emphasis on the Dirichlet problem in bounded domains. It grew out of lecture notes for graduate courses by the authors at Stanford University, the final material extending well beyond the scope of these courses. By including preparatory chapters on topics such as potential theory and functional analysis, we have attempted to make the work accessible to a broad spectrum of readers. Above all, we hope the readers of this book will gain an appreciation of the multitude of ingenious barehanded techniques that have been developed in the study of elliptic equations and have become part of the repertoire of analysis. Many individuals have assisted us during the evolution of this work over the past several years. In particular, we are grateful for the valuable discussions with L. M. Simon and his contributions in Sections 15.4 to 15.8; for the helpful comments and corrections of J. M. Cross, A. S. Geue, J. Nash, P. Trudinger and B. Turkington; for the contributions of G. Williams in Section 10.5 and of A. S. Geue in Section 10.6; and for the impeccably typed manuscript which resulted from the dedicated efforts oflsolde Field at Stanford and Anna Zalucki at Canberra. The research of the authors connected with this volume was supported in part by the National Science Foundation.