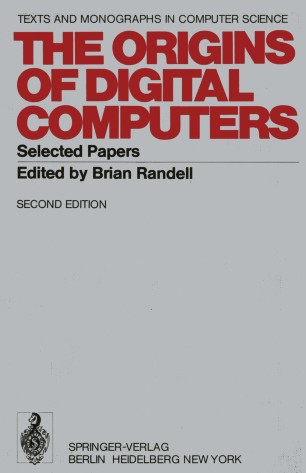 The Origins of Digital Computers

My interest in the history of digital computers became an active one when I had the fortune to come across the almost entirely forgotten work of PERCY LUDGATE, who designed a mechanical program-controlled computer in Ireland in the early 1 'JOO's. I undertook an investigation of his life and work, during which I began to realise that a large number of early developments, which we can now see as culminating in the modern digital computer, had been most undeservedly forgotten. Hopefully, historians of science, some of whom are now taking up the subject of the development of the computer and accumulating valuable data, particularly about the more recent events from the people concerned, will before too long provide us with comprehensive analytical accounts of the invention of the computer. The present book merely aims to bring together some of the more important and interesting written source material for such a history of computers. (Where necessary, papers have been translated into English, but every attempt has been made to retain the flavour of the original, and to avoid possibly misleading use of modern computing terminology.