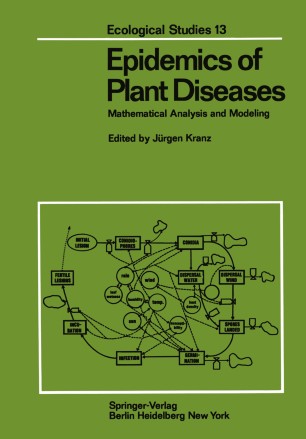 During the past decade epidemiology has developed beyond the simple desrip­ tion of ecological factors affecting disease. Population dynamics has become a major item of research, which in turn has prompted new approaches and philosophy. Though basically an empirical science, epidemiology has of necessity veered towards mathematical methods and modeling. The growing importance of epidemiology was acknowledged by the organizers of the 2nd International Congress of Plant Pathology, held in Minneapolis in September 1973. One of the symposia was devoted to a discussion of the role of mathematics and modeling in the analysis of epidemics. The speakers considered that it would be valuable to expand their contributions for publication. The following chapters give an outline of the record of achievement to date in the use of mathematical analysis and computer techniques in the study of epidemics of plant diseases; at the same time they seek to indicate the greatly enlarged possibilities, still in the early stage~ of investigation, of constructive work on this basis used in the field of epidemiology. A good beginning has been made in clarifying the very complex and sometimes confusing data by means of mathematical models and equations, and later by computer simulations. In this book practical procedures, such as experiments in coding techniques, reduction of data, computer programs, the particular scope of multiple regression analysis in the study of the progress of epidemics, disease increase and severity, disease cycles and crop losses, are variously discussed.