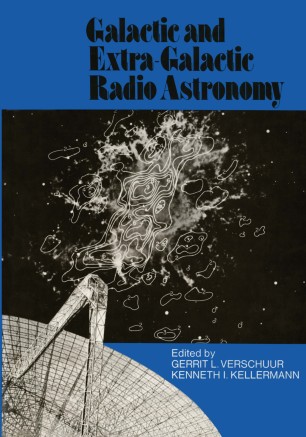 The present set of chapters by members of the staff of the National Radio Astronomy Observatory deals with the basic fields of research concerned with radio astronomy outside the solar system. The emphasis in this volume is on the type of data available and its interpretation. Basic theory is considered only where absolutely necessary, and little discussion of receivers or techniques is entered into in most of the chapters. The book is intended to take over where most textbooks on radio astronomy leave off, that is, in the discussion of what is actually known from the research done. In addition there is a chapter on the technical aspects of inter­ ferometry and aperture synthesis, since so much of modern radio astronomy depends, and will depend in an ever increasing manner, on such tools. The editors want to stress that the chapters were not necessarily expected to be compre­ hensive reviews of any of the fields being covered, but rather, overall outlines which the in­ dividual authors feIt would be suitable for graduate students and interested workers in other fields. As a result, the lists of references are not complete. This only refiects the preferences of the individual authors and not the relative merit of those references incIuded or omitted.