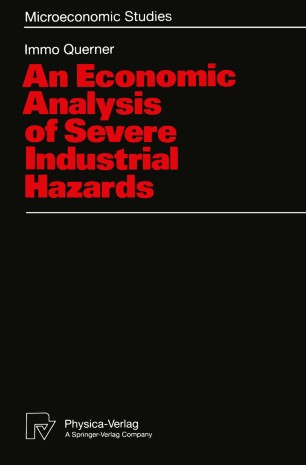 and Acknowledgments Apparently almost every other month severe industrial hazards invade our living rooms, be it in terms of an ex post report or in terms of an alarming scenario, be it in a remote corner of the world or just in front of our doorstep. Although the invasion of our living rooms is mostly only via printed or electronic media (as opposed to personally experienced tragedies), people in the western hemissphere seem to be concerned, and so are politics and science. Given that welfare-economics has played (or is about to play) a helpful role in terms of analyzing and rationalizing "political" issues (such as the environment, education, or the law) that had been deemed too soft, too psychological, too value-laden, or too political, a book about the economics of catastrophic industrial hazards and their prevention will hardly come as a surprise. However, what are the precise obj ecti ves of this book? For a start, the author intends to argue the welfare-economic relevance of severe industrial hazards, both from a theoretical as well as from a very down-to-earth perspecti ve. Secondly, it shall be demonstrated that and how the problem can be theoretically dealt with, without really departing from standard micro-economics, in particular the "Pareto principle" and, when it comes to very small "collective" physical risks, the well established "von Neumann-Morgenstern" framework.