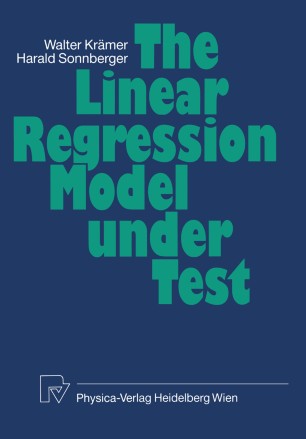 The Linear Regression Model Under Test

This monograph grew out of joint work with various dedicated colleagues and students at the Vienna Institute for Advanced Studies. We would probably never have begun without the impetus of Johann Maurer, who for some time was the spiritus rector behind the Institute's macromodel of the Austrian economy. Manfred Deistler provided sustained stimulation for our research through many discussions in his econometric research seminar. Similar credits are due to Adrian Pagan, Roberto Mariano and Garry Phillips, the econometrics guest professors at the Institute in the 1982 - 1984 period, who through their lectures and advice have contributed greatly to our effort. Hans SchneeweiB offered helpful comments on an earlier version of the manuscript, and Benedikt Poetscher was always willing to lend a helping . hand when we had trouble with the mathematics of the tests. Needless to say that any errors are our own. Much of the programming for the tests and for the Monte Carlo experiments was done by Petr Havlik, Karl Kontrus and Raimund Alt. Without their assistance, our research project would have been impossible. Petr Havlik and Karl Kontrus in addition. read and criticized portions of the manuscript, and were of great help in reducing our error rate. Many of the more theoretical results in this monograph would never have come to light without the mathematical expertise of Werner Ploberger, who provided most of the statistical background of the chapter on testing for structural change . .