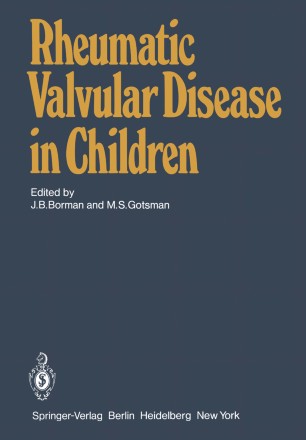 In the Middle Eastern states, in the developing countries of Southeast Asia and Africa with their vast populations, in the poverty-stricken Central and South American lands, and in other underprivileged parts of the world, rheumatic heart disease is a major problem with a high morbidity and mortality. In these areas the disease frequently attacks children, in whom the course is much more malignant than in adults. This re­ sults in severe pathologic changes in the cardiac valves from an early age. Stenosis of the mitral valve is one of the more common lesions, and closed mitral commissurotomy is often carried out in children. Furthermore, mitral insufficiency, aortic insufficiency, and tricuspid valve pathology may cause such life-threatening hemodynamic effects as to require valve replacement, usually electively, or even occaSionally, as an emergency. This differs from experience in the affluent sections of the population in the developed countries where severe rheumatic valvular pathology in children is uncommon, and sur­ gery for the advanced form of the disease is limited to adults. Recent progress in diagnostic methods, great advances in surgical skill, and the de­ velopment of improved valvular prostheses encourage the application of valvular sur­ gery - so successfully carried out in adults - to children. Such surgery is being under­ taken with increasing frequency, and the long-term results are encouraging. It was therefore considered important to collect the considerable but scattered information on the subject and to present it in monograph fOml.