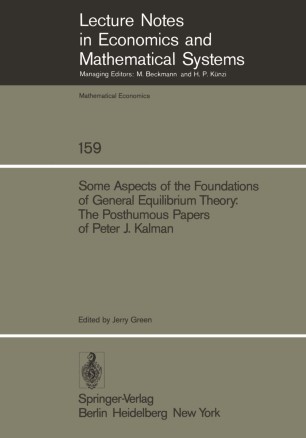 Some Aspects of the Foundations of General Equilibrium Theory

In a wide number of economic problems the equilibrium values of the variables can be regarded as solutions of a parametrized constrained maximization problem. This occurs in static as well as dynamic models; in the latter case the choice variables are often paths in certain function spaces and thus can be regarded as points in infinite dimensional spaces. It is sometimes possible to determine qualitative properties of the solutions with respect to changes in the parameters of the model. The study of such properties is often called comparative statics; [15], [2], and [10]. Certain comparative static properties of the maxima have proven to be of particular importance for economic theory, since the works of Slutsky, Hicks, and Samuelson [15]: they have been for- lated in terms of synunetry and negative semidefiniteness of a matrix, called the Slutsky-Hicks-Samuelson matrix. A discussion of this matrix and its applications is given in Section 1. The study of these properties in economic theory, however, has so far been restricted to static models where the choice variable and the parameters are elements in Euclidean spaces, and where there is only one constraint.