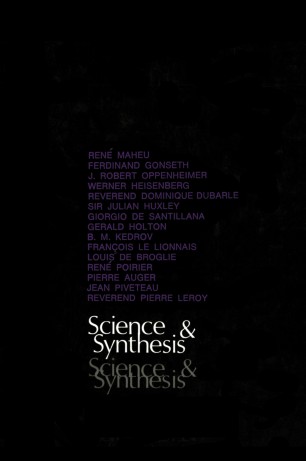 This volume is a collection of the lectures and discussions at an international colloquium organized by Unesco on the theme of Science and Synthesis to mark the occasion of the 10th anniversary of the death of both Einstein and Teilhard de Chardin, also the 50th anniversary of the theory of general relativity. Despite the great gulf which lies between the work of Einstein and Teilhard de Chardin, the coincidence in the dates provided an opportunity to examine the urge towards a synthesis of the scientific and philosophical approaches which lies at the very heart of the work of these two great men. It was, indeed, their common desire for an all-embracing concept of the universe which led them both to try to construct a cosmology for the modern world. So it seemed that the best way of honoring Einstein and Teilhard de Chardin was to arrange a free discussion of the current likelihood of effecting a syn­ thesis of scientific knowledge which would bring together some of today's most eminent scholars, inspired by the wish to make their research more meaningful by philosophic reflection. The resulting give and take of ideas would go far beyond mere commemoration; it would bring their ideas to life by setting them against the present state of science.