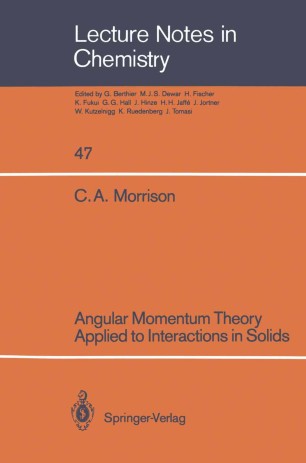 From December 1985 through March 1986 the text of this book formed the basis of an in-hours course taught by the author at Harry Diamond Laborato­ ries. Considerable assistance in revising and organizing the first draft was given by John Bruno. The original draft of these notes was based on a collection of lectures delivered at the Universidade Federal de Pernambuco, Recife, Brazil, between 2 November 1981 and 2 December 1981. The visit to Recife was a response to an invi tation of Professor Gilberto F. de Sa of the Physics Department. In the preparation of these notes I made many requests of my coworkers for earlier resul ts and recollections of our early work. Among those consul ted were Donald Wortman, Nick Karayianis, and Richard Leavitt. Further, a number of .suggestions from my Brazilian colleagues helped make the lectures more clear. Particular among these were Professor Oscar Malta and Professor Alfredo A. da Gama both of whom I wish to thank for their help. Encouragement and assistance with funding for much of this work came from Leon Esterowitz of the Naval Research Laboratory and Rudolph Buser and Albert Pinto of the center for Night Vision and Electro-Optics.