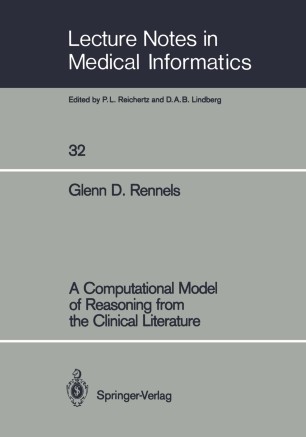 A Computational Model of Reasoning from the Clinical Literature

As research on expert systems has moved well into its second decade, it has become popular to cite the limitations of the phenomenologic or associational approach to knowledge representation that was typical of first generation systems. For example, the Internist-1 knowledge base represents explicitly over 600 diseases, encoding associated disease manifestations (signs, symptoms, physical findings, and lab abnormalities) but failing to deal with the reasons that those findings may be present in the disease [Miller, R. A. 82]. In recent years Pople has sought to add detailed causal models to the knowledge base in a revised version of the program known as CADUCEUS [Pople 82]. Similarly, a typical production rule in the MYCIN system states inferences that may be drawn when specific conditions are found to be true [Buchanan 84], but the underlying explanations for such relationships are not encoded. Clancey has argued that MYCIN needs such "supporting knowledge" represented, especially if its knowledge base is to be used for teaching purposes [Clancey 83]. By the late 1970s, artificial intelligence researchers were beginning to experiment with reasoning systems that used detailed mechanistic or causal niodels of the object being analyzed. Among the best early examples were a program to teach students how to analyze electronic circuits [Brown 82] and a system for diagnosing problems with mechanical devices [Rieger 76].