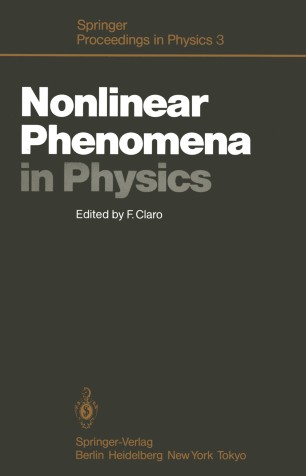 It was almost four hundred years ago that Galileo wrote in Il Saggiatore that the "Book of Nature is written in mathema ti ca 1 characters". Thi s sentence, i nspi red at the dawn of physics has proved with the passage of time to contain a deep truth and also a warning: in order to understand Nature, first we must learn to read mathema­ tical characters. Indeed, writing physical law in such characters has proved not as hard as unraveling the content of the resulting equations. In particular, the lack of knowledge in the field of nonlinear mathematics has been a severe limita­ tion in the past. Thus the solution to equations such as the Navier-Stokes equation in fluid dynamics has remained elusive. The recent advent of fast computers and some important analytical and numerical results in the study of bifurcations and nonlinear waves have encouraged work both in theory and experiment involving non­ linear phenomena. An explosive growth in the specialized literature penetrating most research areas in physics in the last few years has ensued. This book contains the most recent advances in nonlinear physics in various fields including astrophysics, gravitation, particle physics, quantum optics, fluid dynamics and the mathematics underlying the phenomena of chaos and nonlinear waves. It presents a selection from the lectures delivered at the XXI '_atin American School of Physics held in Santiago, Chile in July-August 1984 (EtAF'84).