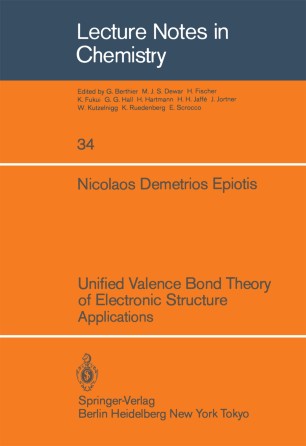 The bond diagrammatic representation of molecules is the foundation of MOVB theory. To a certain extent, this kind of representation is analogous to the one on which "resonance theory" is based and this fact can be projected by a comparison of the various ways in which MOVB theory depicts a species made up of three core and two ligand MO's which define two subsystems containing a total of six electrons and the ways in which "resonance theory" (i. e. , qualitative VB theory) depicts a six-electron-six-AO species such as the pi system of CH =CH-CH=CH-CH=O. The 2 different pictorial representations are shown in Scheme 1 so that the analogies are made evident. First of all, the total MOVB diagrammatic representation of the 6/5 species is obtained by a linear combination of three complete bond diagrams, as in Al, which describe the optimal linear combination of!l! MOVB Configuration Wavefunctions (CW's). By the same token, a total VB diagrammatic representation of the 6/6 species can be obtained by writing a "dot structure", as in Bl, and taking this to mean the optimal linear combination of all VB CW's. Next, we can approxi­ mate the MOVB wavefunction of the 6/5 species by one complete (or detailed) bond dia­ gram" (A2). No simple VB representation analogy can be given in this case. Alterna­ tively, we can approximate the MOVB wavefunction by a linear combination of compact bond diagrams, as in A3, in the way described before.