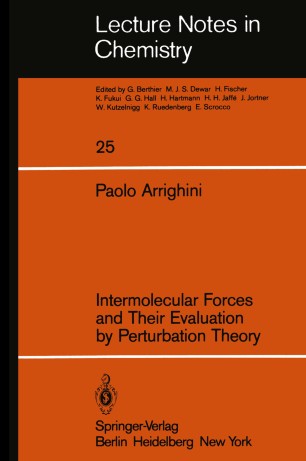 Intermolecular Forces and Their Evaluation by Perturbation Theory

The aim of these notes is to offer a modern picture of the pertur­ bative approach to the calculation of intermolecular forces. The point of view taken is that a perturbative series truncated at a low order can provide a valuable way for ~valuating interaction energies, especial­ ly if one limits oneself to the case of intermediate- and long-range distances between the interacting partners. Although the situation corresponding to short distances is essen­ tially left out from our presentation, the problems which are within the range of the theory form a vast and important class: a large var­ iety of phenomena of matter, in fact, depends on the existence of in­ teractions among atoms or molecules, which over a substantial range of distances should be classified as weak in comparison to the interactions occurring inside atoms or molecules. We are aware of the omission of some topics, which in principle could have been included in our review. For instance, a very scarce at­ tention has been paid to the analysis of problems involving interacting partners in degenerate states, which is of particular relevance in the case of interactions between excited atoms (only a rather quick presen­ tation of the formal apparatus of degenerate perturbation theory is in­ cluded in Chap. III). Interactions involving the simultaneous presence of more than two atoms (or mOlecules) have not been considered, with the consequent non-necessity of considering nonadditive effects which characterize the general N-body problem.