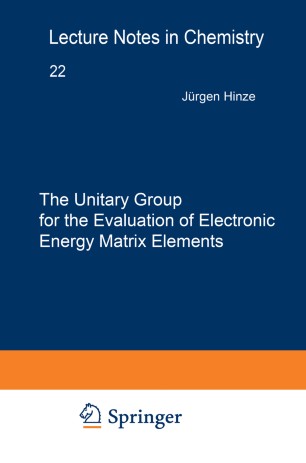 The Unitary Group for the Evaluation of Electronic Energy Matrix Elements

During the last thirty years, with the development of high speed electronic computers, methods have evolved, which permit an accurate and quantitative, ab initio determina­ tion of the electronic wavefunctions of atoms and molecules. Thus a detailed elucida­ tion of the electronic energy and structure of molecules has become possible using quantum mechanics directly. Ho\~ever, it is necessary, if such calculations are to yield accurate and reliable results, to include electron correlation explicitely, which requires in general . configuration mixing procedures with an extremely large 5 number of configurations, of the order of 10 configurations. With eigenvalue problems of this size, the limits of even the largest and fastest computers are reached rapidly, and their solution has become possible only, because direct methods have been deve~ loped which permit the determination of eigenvalues and eigenvectors for such large matrices iteratively without constructing the energy matrix explicitely. These direct methods had been limited to the description of closed shell systems, i. e. systems with a single dominant closed shell reference determinant. This limitation arose, because with an open shell reference or with several reference determinants, no procedures were known, which allowed a rapid calculation of the energy matrix elements between configurations with general and widely different spin couplings, which would be necessary. Recently such methods have been developed, based on early work of Gelfand, Biedenharn and Moshinski using a unitary group representation of different spin coupled states; Paldus achieved an extremely compact description.