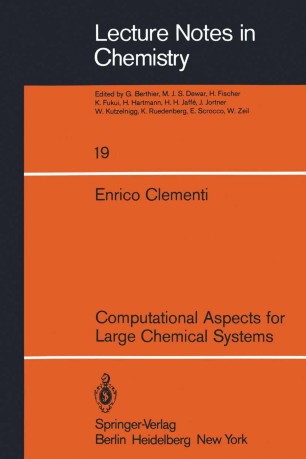 1. 1 STATEMENT OF THE PROBLEM Quantum chemistry judged not from the ever present possibility of unex­ pected developments but on the basis of the achievements in the last fifty years, is predominantly limited to attempts to solve for the energy and expectation values of wave functions representing, in the limit, an exact solution to the Schroedinger equation. Because of well-known dif­ ficulties in system with more than about 50 electrons, the adopted ap­ proximations are generally rather crude. As examples of quantum chemical approximations we mention the total or partial neglects of electron correlation, the neglect of relativistic effects, the use of subminimal basis sets, the still present neglect of inner-core electrons in semi-empirical methods, the acceptance of the Born-Oppenheimer approximations, and so on. In general, the larger the system, in terms of the number of electrons, the cruder the approxima­ tion. In a way, the present status of quantum chemistry might appear as nearly paradoxical. Indeed, for small systems, where very accurate ex­ periments are often available, and therefore, there is not a great need to obtain (from quantum chemistry) predictions of new data but rather ,a theoretical interpretation of the existing data, we find increasi~gly powerful and reliable quantum chemical methods and techniques.